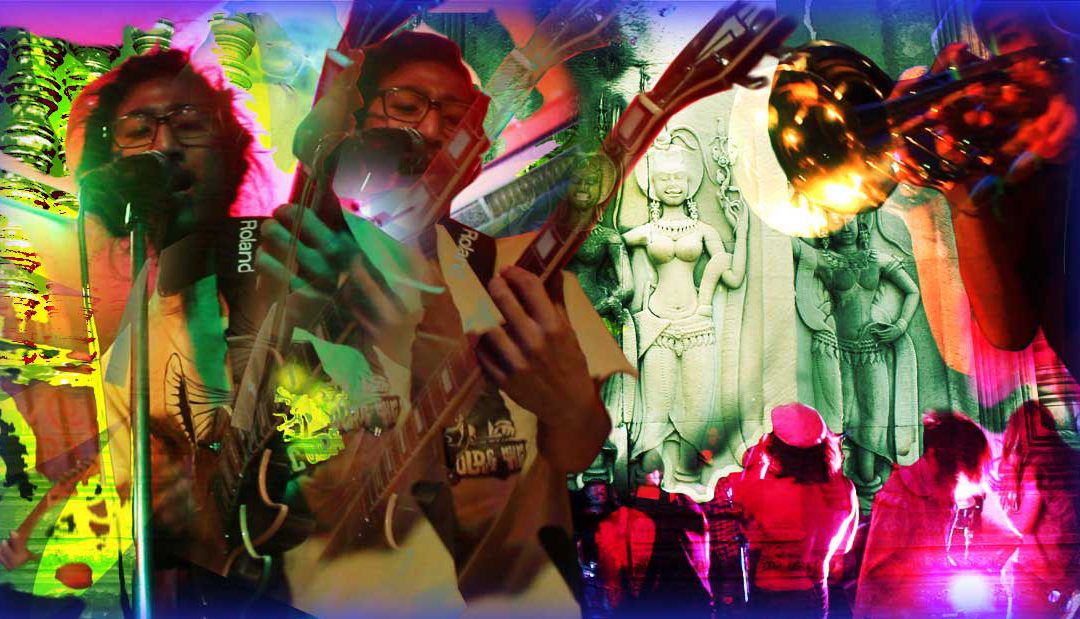 It’s Nottingham, 2007, and our Rat’s at uni. One of her much cooler housemates’ boyfriends is banging on about some Cambodian Surf Party a kid in the block was having last night. It sounds like another one of those ketamine fuelled, retro-novelty vegan crunk nights. The hipsters were in incubation, bringing a wave of obscure vinyl-kitsch in their wake, and with our Rat and pals being of the more breakbeat-inclined ilk, no one is paying much attention.

Fast-forward to 2013, a beach in Thailand. “These buckets are ace”, says hot-bod Nick. “Where should we head next? I hear Cambodia is totally intense, man,” replies Toby, his brand-new ‘sexy man discount’ bamboo tattoo gleaming in the sunset. “You can shoot a cow with a bazooka”. Nick stirs his Samsong & Coke. “Yeah, I heard Phnom Penh’s pretty happening right now. Like, for travellers, not tourists, ya know?” “Yah, totes”…. *slurp*. Aside from the usual war and genocide history, Nick and Toby find themselves in for a treat, when they hit the big city lights of Cambodia’s capital city 3 months and roughly 800 buckets later. Our Rat shares a 6-hour train ride with them, discovering an actually genuinely interesting bunch of dudes behind the Gap Yah facade. She also realizes, that she’s gonna have to retrospectively give credit to her otherwise obnoxious involuntary housemate. Turns out, the Cambodian rock scene is something pretty special.

Rewind to the 1950s. Southeast Asia has its ancient cultural routes on display all over the place, whilst each region is heavily entwined in it’s own political struggles against ex-colonial powers as well as the big players of the 20th century. Europe and America are bracing themselves after decades of armed conflict. Re-building after WW2 and learning to deal with the challenges of modern life and technological innovation (microwaves!), the focus of most people is placed firmly in the west. But at the height of the Cold War, Princes and Princesses, CIA and KGB, foreign schooled rich-kids and radio-obsessed poor kids, diplomats and degenerates were all dancing to a new beat in a far away kingdom.

Cambodia in the 1950s had one of the most vibrant and advanced music scenes in the whole of Asia. Phnom Penh’s dance halls were raving with Big Band music and the cities’ foreign-schooled elite brought back the newest records by Perry Como, Pat Boone and Frank Sinatra when returning during summer breaks from university in Paris. Even the rats were sneaking in through the back entrance to catch a soiree of Petticoats & Dreamboats. King Sihanouk’s rule was fraught with poverty and political repression, but creativity and artistic expression were widely encouraged and supported. Whilst playing dangerous political hot potato, breaking ties with the USA, hosting a visit from Jackie Kennedy, allowing North Vietnam to build bases and relying on the good will of China (yah, good luck with that one), the King found time to play the saxophone, piano and clarinet as well as composing and often performing songs in English, French and Khmer, with his wife Norodom Monineath.

The 60s and 70s saw the Cambodian popular music scene explode with it’s own version of rock n roll as rich-kid bedrooms as well as rural homes blared with the music filling the airwaves from GI radio, stationed just across the border during the Vietnam War (1962-1975). Kids all over the place were coming up with their own versions, mixing Khmer lyrics, microtonal singing, Farfisa organs and rocky guitar solos with the sounds of The Beatles, Jimmy Hendrix, The Kinks, The Rolling Stones, CCR and The Doors. Combining Elvis and Frank Sinatra in one Cambodian swoon-inducing persona, Sin Sisamoth is still considered the greatest Cambodian Singer of all time. Here’s a direct Sin-Elvis comparison (Elvis sings second). Ros Sereysothea, Cambodia’s answer to Janis Joplin, was named “The Golden Voice of the Royal Capital” by King Sihanouk himself. If you’re into Jefferson Airplane, you’ve got to give this a listen. It’s pretty wonderful. Pan Ron is another famous name who joined the creative powerhouse of Cambodia’s musical triumphs of the 60s and 70s, publishing an impressive amount of vinyl, from romantic ballads to psychedelic surf-pop with a hint of afro-cuban influence from artist like Santana.

As well as music, film was big on the agenda. King Sihanouk was into making feature films. How does he find the time, you ask? Well, he was kind of a big deal. He inevitably won the annual Cambodian Film festival he organized. Think of it as the good old days when Schumacher always won the Formula 1, but who came 2nd and 3rd was the really interesting bit, as the festival gave voice to other Cambodian film makers on a regular basis. “What? Modernity in the unenlightened East?” we hear the cynics amongst you cry out. We’re not for a moment suggesting that Cambodia’s adoption of western music and art themes is some sort of quaint colonial imitation. Cultures all over the world inspire each other, but the rate at which rock and roll was released in the west and adapted, with an incredibly short time lag, into Cambodian popular music is exceptional.

And just as quick as a track was transformed from a Liverpool vinyl press to a popular Cambodian dance track, it all ended abruptly with the rise in power of the Khmer Rouge. You can read up on the details of the horrors of the Cambodian Genocide between 1975 and 1979, but for this post’s purposes, it suffices to say that this incredible creative scene was obliterated completely with the targeting of intellectuals, artists, ‘decadent’ western influencers and the killing of over 2 million Cambodians. Famous faces found it impossible to hide, but some backing vocalists, drummers, guitar and bass players managed to pass themselves off as peasants and some survived the hard labour.

What little of this once unstoppable scene was left after the Khmer Rouge was traumatised and stripped of its identity. The assembly of the 2014 documentary on Cambodian Rock & Roll “Don’t think I’ve forgotten” is little short of a miracle, as most footage, photography and music recordings from the era were destroyed to save people’s lives from Pol Pot’s state police. Nevertheless, some brave souls hung on to fragments of the time, despite the danger. The re-building of Cambodia’s rock culture and abundance of gigs in modern-day Phnom Penh are easy to take for granted, but are a true testament to Cambodia’s cultural spirit that survived near destruction to become so incredibly vibrant today.

So, you want to get your teeth into some Surf Rock? Hell, yeah you do! If you’re a start-way-back-from-the-beginning kind of girl or guy, check out the Rough Guide to Psychedelic Cambodia compilation album. or Parallel Lines’ Cambodia Rocks. For something more contemporary, listen to the epic sounds of Khmer singer Srey Channthy and her Aussie Band lead by Julien Poulson as she sings “Whisky Cambodia”. It almost fits into the Suckerpunch soundtrack, and just check out that digeridoo. Now hear her band The Cambodian Space Project not taking themselves too seriously in “Have Visa No Have Rice”. LA-Cambodia collaborative band Dengue Fever also rips it up with psychedelic tunes to accompany your next acid trip (or Asda trip if you’re not into drugs).

Somewhat reminiscent of living the expat dream finally-being-in-a-band-here-when-people-at-home-would-have-laughed-or-beaten-me-up, Leicester born rapper Gobshite (you do it to yourself, bro) is making his name in Phnom Penh. Whatever your taste, his teaming up with local rapper Chally Dang (aka Prolyfik) and Srey Leak is creating an interesting mix of old Khmer styles and modern urban arts, which may be the accessible middle way for teenage inner-city Brits to explore more of Cambodia’s musical culture.

And just at the right time, as Cambodian contemporary art is spreading through Phnom Pen’s galleries such as Meta House, The Java Café & The Bophana Centre and hits the world stage in New York. Rity Panh of the Bophana Centre received Cambodia’s first ever Academy Award nomination in 2014 for the animation “The Missing Picture”, whilst the Insitut Francais du Cambodge runs an urban art festival showcasing work by Lisa Mam, Peap Tar and Fonki, who spend their time painting awesome stuff on bars, advertising, restaurants and hotels, rivalling Ernest Zacharevic’s world-famous work in Penang. International ‘graffiti tourists’ such as the UK based ‘world domination’ group, come, paint and leave, reflecting graffiti as the art of the lower class, who don’t have the money for high-brow gallery work, but steal cans and paint guerrilla style where their finished work can’t be ignored. Paradoxically, this ‘art by the poor’ model doesn’t sit well with Cambodian Buddhism, as stealing is out of the question and kids need people like Benjamin Pecquer, Cambodia’s country manager for Skatistan, to allow them to use his HQ as a canvass. Norodom Blv also has pretty good graffiti, check our Lee Bo’s “Global Street Art” web archive next time you’re planning a trip to the capital.

All in all, Cambodia has a hell of a lot to offer and its unique positioning that encourages art and musical crossover has created some surprisingly awesome stuff. So next time you feel like throwing a little hippy revival soiree with your unenlightened mates, make them actually listen to some Cambodian Surf Rock. Our Rat would have had her pointy ears opened to a whole world of wonder back in 2007’s draughty, pot-noodle filled kitchen, and would have been telling Nick and Toby all about her amazing discoveries on the way to Aranyaprathet, instead of the other way round. On that note, you should definitely read the short guide on shit to say to backpackers. And get your mits on some Cambodian Space Project vinyl, apart from being awesome, it might even qualify to make you a bit of a hipster.