Of natural hot tubs and screams of joy in pubs: The mini kiwi road trip Part 2 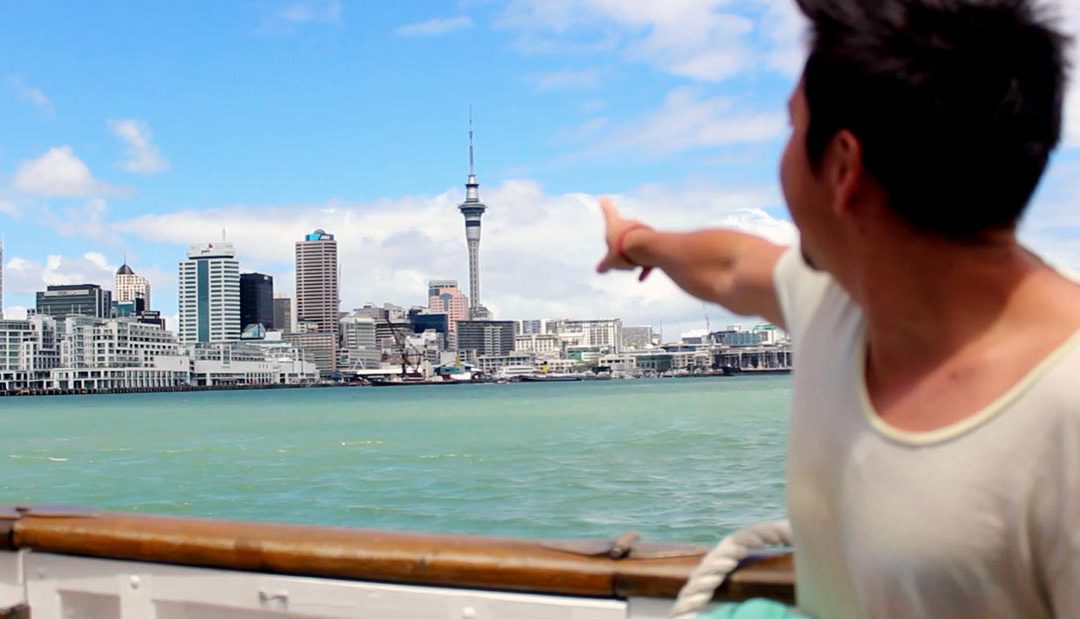 Did you know that you can actually see Mount Doom from Hobbiton? Mount Ngauruhoe (the volcano’s non-hollywood name) was unfortunately not on our list this trip, but as we left Hobbiton through rolling green hills we spotted its conical shape in the distance, and marvelled at Kerry, Chris and Nick’s achievement of walking Frodo’s 6 month journey to Mordor in just one week. But outside the fantastical world of a Hollywood movie set, New Zealands flaura and fauna just kept on being amazing. There is a reason the other-worldly films were set on these Islands in the South Pacific, and this reason is that New Zealand already has an other worldly feel to it.

(if you’ve missed Part 1 of the Mini Kiwi Road Trip, here it is!)

We are used to the climates of Northern Europe, with cold ocean swells crashing on rugged cliffs, misty mornings on the moors and lush green forests meeting sweeping hills. But walking around New Zealand’s rainforests marvelling at huge ferns, thick moss and star-wars shaped trees, shrubs and leaves made us feel like we were truly on another planet. And although we’d only been here for a couple of days, due to everything being relatively close together, we had seen a huge amount of unique landscapes.

Tummys full of pizza from nearby Mata Mata, we headed northwards, past the giant LP Bottle and the Karangahake Gorge suspension bridge, all the way North East to the peninsula that shields Auckland from the Pacific’s heaviest swells. The Coromandel is covered in temperate rainforest and surrounded by stunning cloastline including Cathedral Cove best explored by sea kayak. If you’re like us and love the great outdoors, but get cold a lot, head to Hot Water Beach at low tide and dig your very own volcanic jacuzzi. And when we mean hot, we don’t mean ‘yeah it’s kind of a little bit tepid if I really concentrate on the amazingness of nature’. We mean ‘burn your feet if you don’t top your pool up with freezing sea water’ hot. As the full moon coincided with clear weather and a low tide at 11:30pm, we hardly noticed we had spent 3 night time hours sitting in a bikini and board shorts watching the stars through soft steam.

One of the great things about flexible travel is that if you meet someone, and they have a cool gig going on somewhere, or idea, or recommendation, you can go check it out. So the next day we were driving along stunning coastal roads to see our Kayak guide’s mate, who happened to own his own winery. The day which involved stopping off for Oysters for lunch and shooting lookouts at Shakespeare Cliff just south of Whitianga couldn’t have ended better than being treated to Jonno’s self-christened ‘haka’ about his Purangi winery, diverse produce, family ancestry and local popular culture. After 3 hours of chatting about the surprisingly huge diversity of flaura you can make alcoholic beverages out of, and the interconnectedness of the world as a result (New Zealand’s unofficial national fruit isn’t a Kiwi, and was brought over from Brasil, hence the name “feijoa”), resident backpackers and a dog joined as the delicious aroma of home made wood fire pizzas from the pub area wafted over us.

Returning to Auckland would have been harder, if the coastal road hadn’t been as spectacular. Cutting through mountainous terrain of the Coromandel peninsula, you really got a sense of what a scenic route should be. Over the green hills and blue ocean we spotted a city in the distance – New Zealand’s capital in fact, which would be our next and final stop on the Mini Kiwi Road Trip. Parking a massive campervan in the city is ok in parts, but leaving it overnight was going to be tricky. Luckily we’d had a suggestion to stay north of the bridge in the Takapuna Beach Holiday Park and whilst not huge it couldn’t have been a better place to bunker down for a few days. The weather had been playing up so the War Rig was able to show off its huge advantage over a smaller van: it had tonnes of space. With a double bed above the drivers cabin that didn’t need assembling, a kitchen you could really cook in, central heating and a great sitting area at the back, we were finally able to work, relax and invite friends for dinner when it was too rainy to do any filming. You may say we’re getting middle aged, but having the space to comfortably hang out with 6 friends, dinner, beers and cards against humanity whilst the rain pelted down outdoors was bliss.

Sitting on a dormant volcanic field, there are plenty of extinct volcanoes to spot or even scale in and around Auckland including Mount Eden, One Tree Hill and the Domain. Tamaki Drive along to Mission Bay has great views of the city (like the one above) and if you prefer the water, you can go on a pirate ship (or the aptly named ‘SS Puke’) for the day and spot daring bungee jumpers fall off the Auckland Harbour Bridge. As the unofficial but bad-ass inventor of extreme sports, New Zealand has tonnes to offer for thrill seekers great and small. Did you know that there is no age limit for skydivers? That the youngest skydiver on record is 5 year old Erin Hogan? Well you don’t need to look far for your next kick as you can actually freefall off Auckland’s inner city Skytower. Or just walk around the outside of it, leaning over the edge, like we did. Or sit inside and eat dinner. Or just chill on the observation deck. Or hang out at the casino.

Two nights later the spectacular views from the Skytower lay high above us, but it was exactly where we were drawn back to as the country exploded in a celebration of pride and joy. At 4am on a Sunday morning we found ourselves roaming the streets for a bar that wasn’t ram packed full, dodging drunk backpackers in worn off Halloween facepaint, runners on their way to the Auckland marathon, rowdy sports fans, and those who like us were fresh on coffee from getting an early night for an early start. After 2 hours of incredible atmosphere The All Blacks won the world rugby cup and the following day was once of the most exhilarating displays of collective delight we have ever witnessed. Kiwis take supporting their sports teams very seriously (with rugby at the heart, their basketball team is referred to as the ‘Tall Blacks”) and are comparatively good natured so Sunday morning celebrations at Best Ugly Bagles and a day trip to Waiheke Island and its wineries and oyster feasts couldn’t have rounded our trip off better.

New Zealand, a land far far away, but one you have to (and we mean HAVE TO) put on your list of urgent visits. There is something you can’t describe adequately in a postcard, and if our tiny taster of adventures to come is anything to go by, we simply cannot wait to get stuck straight back in.