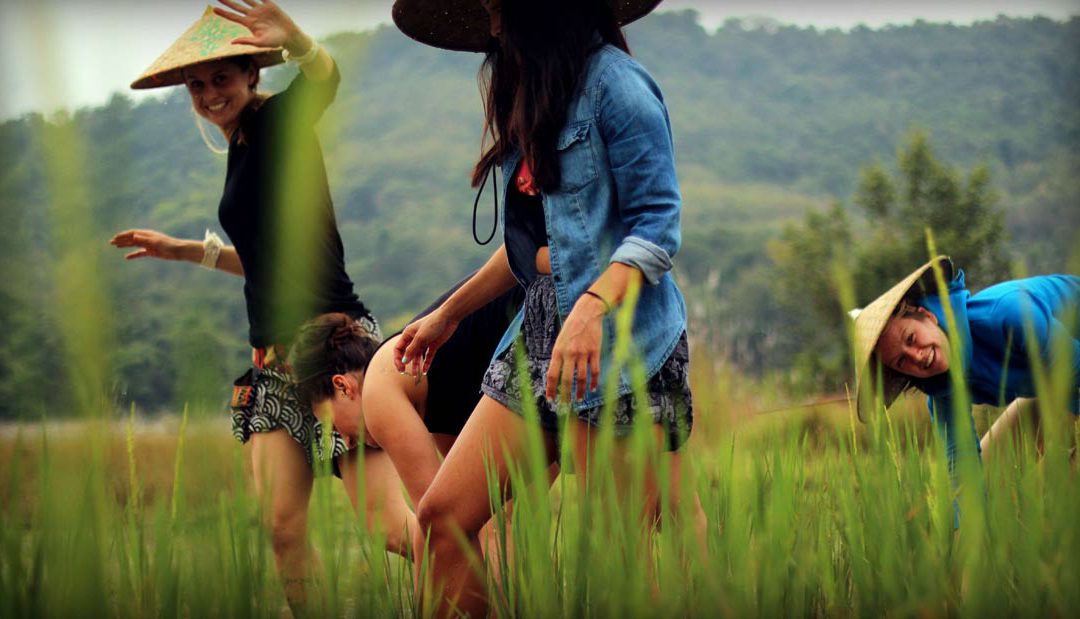 Returning wide-eyed and open mouthed from our 3 day mind-warp to the Field of Pots, (sorry, Plane of Jars), the Pot People (i.e. Ricky, Jodie, Matt, Toto, Dragon and Rat) met our new travel companions at the left turn off that gravel road by the tree. 4 hours windy bus ride later we drifted down the Nam Song River at Vang Vieng, in inflated tractor tires, beverages in hand. It was the perfect activity to align our hugely expanded minds with Amy, Evelien, Harriet, Matt number 2, Jay, Lilly and Chao, who did a fabulous job catching up with the help of river-flavoured Beer Lao.

Whilst rope swings and spring break bars have shut down due to health (/death) issues, tubing is still a lovely thing to experience as the surrounding scenery is breathtaking and our fantastic group took the party way through dinner and beyond, turning our riverside restaurant platform into a dance off competition with another table in the bar next door. Cue the re-birth of gangnam style.

The capital lay ahead of us the following day, but as anyone who has been to Vientiane knows, it’s large and industrial with a quaint city centre, but there’s not that much going on. Apart from the very impressive COPE centre (must-see organization dealing with the ongoing effects of UXOs from the Secret War), some temples and the picturesque riverside night market, we were most amused by our guide Chao’s smug giggles at explaining the origins of Laos’ own Arch de Triomphe. American funds and cement intended for a new airport (read: increased US military access) were appropriated somewhat differently by the Royal Laotian government, who had Patuxai Gate constructed in defiance. Locals still repress proud smiles and refer to the Victory Gate as the ‘vertical runway’ to this day.

Far more exciting was our next stop at Kong Lor, where we stayed for two nights amongst impressive karst mountains and rice fields. In true ‘middle of nowhere’ style, the electricity gave up after 5 hours, which lead to a collective loss of inhibitions as we bunched up to hand-wash our dirty clothes in a large bowl ‘borrowed’ from a nearby shed. Local legend has it that a farmer, many years ago, lost his flock of ducks whilst he tended to his far too full bottle of LaoLao one afternoon. Confused yet laissez-fair, he proceeded to explain the concepts of time travel and multiple dimensions to his wife that evening, just to find his ducks being sold at a market on the other side of the mountain a week later. Inter-galactic teleportation aside, the ducks could not have crossed the mountains un-aided, so after frenzied exploration on the farmers part, a huge cave was discovered hiding behind a nearby bush, with a gushing river leading 7 km through the mountain and out the other side. Just goes to show how much attention people sometimes pay to their nearest surroundings.

Pumped up by tales of legendary duck-courage, we split into groups of 3 to board individual longboats, and set off into the vast cave with an incredibly skillful boatsman each, who found his way through the pitch black, around submerged jagged rocks and up underground waterfalls armed only with a flimsy torch. Chao proudly pointed out the electrical cables that lead to a small but impressively lit 5 minute walking trail in the heart of the mountain, where we could see various stalactites and stalagmites before jumping back into the boats. This was indeed the height of technology in these parts. Topped off with a BBQ, swim and Ricky’s own fishing show, we all had a fantastic day.

A long drive brought us to Thakhek, where we persuaded our driver to drop everyone off and then take two laps of the small town with our kitted up Dragon perched on the back of a borrowed motorbike, ridden (by our Rat) precariously close to the bus, other vehicles and at one stage the police. The mission for the perfect bus-exterior shot raised a few local eyebrows, as did the amused hollers of the rest of the group, camped out in a nearby restaurant. Mental scaring ensued as four of us (who shall not be named) accidentally paid for a massage in a brothel. At least Chao, who swore he has ‘always told every other group to not go there’ thought it was hilarious. Which in itself was hilarious.

After Thakhek’s somewhat seedy border-town charm, we had a real treat lying ahead of us. After several hours of singing East 17, Hanson and 50 Cent at full pelt we took a right turn off the main road and the driver got his revenge. Our buts got the best massage in weeks, but the potholed dusty paths we hurtled along lead deeper and deeper into amazing countryside so no one paid much attention to the fact we were being turned into Schnitzels. A quick stop at an unassuming pond with a small temple in the centre brought forward 5 huge soft-shelled turtles who were lucky enough to have been born in a lake they were considered sacred (not supper). “Beautiful little buffalo, come to me, aye aye aye” sang the driver and Chao in unison, coaxing the creatures out of the murky water with crackers sold by one of the more entrepreneurial locals just outside the park gates. We decided it wise to not enquire further about the local attraction to little buffalo. While everyone tried to get his or her cameras right into the turtles face and feel its soft leathery shell, Amy made a friend for life in a local, white and brown-patched dog.

Back on the road to Xe Champhone, we drove tantalizingly close to our home stay, but dropped by the local temple first, where a monk happily chatted to us about his life in Michigan until we all hooked up on facebook. The temple was also home to a 200-year-old Buddhist library full of thousands of Sanskrit scriptures and bamboo tablets, all crammed into three small wardrobes in a tiny stilt structure in the middle of a lake. A huge white Buddha statue on the other side of the lake, that had been donated by the Thai government after the old one was bombed in the war, provided a great photo opportunity, as did the monkeys in a nearby forest our group eagerly fed bananas to. Monkey porn ensued.

Our second home stay, whilst less integrated with the locals as the last, was a great communal experience for our now rather large group. We had left the Dutch behind in Vientiane, but four new faces, Tanja, Mary, Claire and Kelly had joined. Tanja and Chao united to become the driving force behind dinner, creating huge amounts of curry, vegetable dishes, bamboo sprout dishes, sticky rice and other tasty treats whilst Ricky and the boys tended to (i.e sporadically and expertly poked) the barbecue. Our Rat was even fortunate enough to try some of the drivers special chilly sauce which, without further ado, made her head explode. Without this core team’s efforts, we surely would have died of starvation. Sitting around the campfire after the fantastic meal we once again reminisced about the joys of travelling, meeting new people and telling the rat race to go eff itself.

Nursing our hangovers over omelet and coffee breakfast, we couldn’t believe there was so little left to go. On the way to Pakse, our group declared a mutiny and, despite what our driver and Chao recommended, jumped straight into the freezing waters of the spectacular Tad Ngeuang waterfall. A hangover cure if there ever was one was followed later by a massage and Indian feast in Pakse’s city centre.

And so, dear readers, we arrive at the final part of this trip through incredible and unsung hero of a country. Scaling the heights of Wat Phou, an ancient temple complex built as the capital of the Khmer empire before Angkor Wat, we marvelled at the amazing views, the intricate carvings of the temples and calm serenity of its hillside setting. It was even better than Bonnie Doon. Little old ladies chanted prayers as they bound cotton bracelets around our wrists and a clear stream of water emerging straight out of a gigantic overhanging rock cooled our sun beaten faces.

A few hours later saw our bus board a river ferry made of a rickety bamboo raft supported by floaters made of old war plane fuel tanks and packing our bags into our final little longboat, we sped through the Mekong’s 4000 islands on the way to Don Det. Cycling through the sunset past numerous bamboo hideouts, some scattered hippies swaying to their private head-raves and a mid-street local cock fight was the perfect round up of this incredible trip with awesome people we can’t wait to see again soon. Laos, you’ve enchanted us, and grown our appetites for adventure in the next stop on our TLC project: Crazy Cambodia.