King or Monster? Rat & Dragon Do a Durian 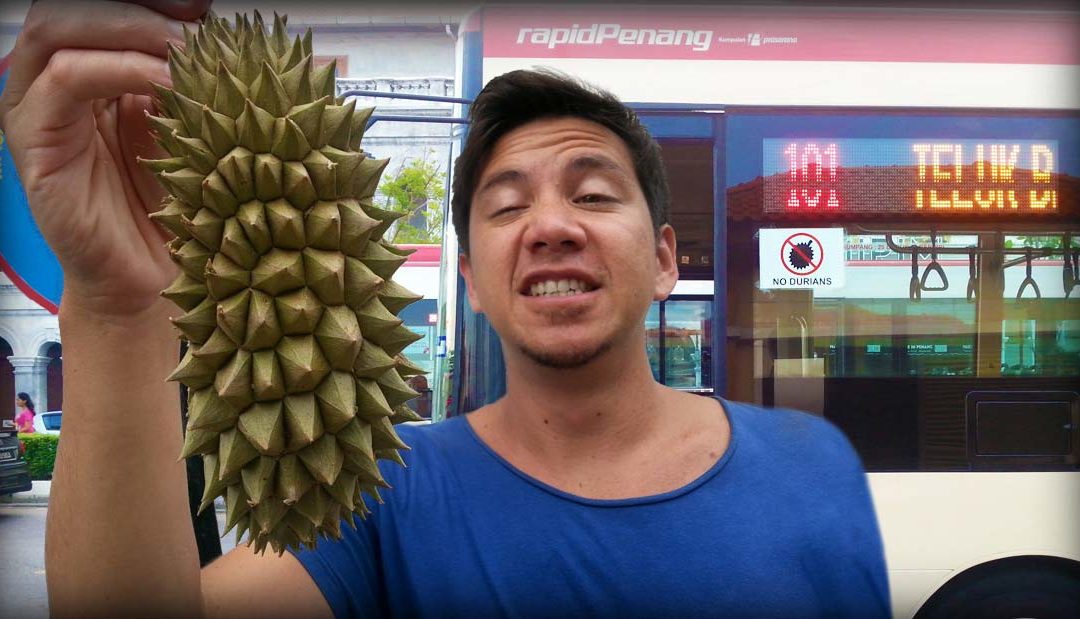 Many hate him.  His armour is so hard and sharp and that he easily punctures and tears through flesh.  He lives in trees, and is so heavy that he can cause enormous damage – even death – if he lands on you from above.

So reviled that he is widely banned from hotels and public transport, it’s also totally illegal to bring him onto an aeroplane.

He is the durian, and he’s the monster of the fruit world.

Growing up to 30cm long and weighing up to 4kg, it’s not his bulk, nor his skin-shredding rind that makes him an outlaw.

It’s his offensive, all-permeating stench that, even unpeeled and sealed in plastic bags, can still poison the atmosphere around him.  The smell is like cheese and sardines wrapped up in dads’ football socks, and it can waft down the street, around the block and punch you in the nostrils as you laze innocently in your guesthouse.

So what the hell do people grow him for?

Well, if the durian is the monster of the fruit world, he’s something of a Dr Jekyll and Mr Hyde.

You see, like Jekyll and Hyde were both sides of the same character, so the durian has two personalities.  While looking and smelling like a monster, he is widely known as the King of Fruit, for the reason that (as many claim), if you can get through the intensity of stench, underneath the spiked armour, deep inside his hard shell lies the single greatest-tasting fruit flesh of the natural world.

Clinging to a steep mountainside and surrounded by rainforest and lush stinky orchards, Mr Sheng built a small durian-tasting balcony with magnificent views over the national park, and beyond that, the sea, somewhere between Batu Ferringi and Balik Pulau on Penang’s northern corner.

Guided there by our local buddy, Eddy (owner of the awesome Pit Stop Cafes in the world heritage lanes of George Town), Mr Sheng introduces us to the mysterious green spiked monster.

“First, to select your durian, pick him up carefully and shake him.  If he rattles inside, he’s too old and dry” he demonstrates.  “My durian are not picked, but fall naturally from the tree when they are ready, ensuring they are the freshest and most flavoursome they can be.  These all fell today.” he says as he points to a massive pile of beast-like fruit on the concrete floor.

Satisfied with his own choice, Mr Sheng pulls out a special curved blade and explains how to slice through the durian to extract the 5 flabby, fleshy segments inside.

“The flesh closest to the stalk is the most intense,” he explains.  “It receives the tree’s nutrients first.”

With deft, spike-proof hands, the years of his durian experience showed in the skill and ease with which he splits the monstrous fruit to reveal enormous cream-coloured segments that look like massive, eyeless grubs, about the size and shape of a healthy man’s poo.

The smell.  Somehow we’d gotten used to it and it didn’t seem offensive anymore.  We were, after all, enveloped in a pungent cloud of durian reek.  Nevertheless, it still hardly looked like food at all, let alone appetising.

Tentatively, we took hold of a chunk.  Its consistency was that of melted cheese.  We were warned about a large, polished seed inside.  We had to suck the creamy flesh off it (insert innuendo here).  We were instructed that the more vigorously we sucked (tee hee), the more air we would draw in with the mouthful, and so the more flavoursome we would find it.

To a great deal of surprise, relief, and furthermore, positive delight, the durian tasted sensational. Utterly unlike any known fruit or vegetable.  In fact, utterly unlike anything either of us had tasted.

To describe it we used words like chardonnay, crisp bacon trimmings, pâté and vanilla custard.  Faintest echoes of fresh mint and caramel latte vie with salty umami.  All of those words and yet none of them at all worked to pin the sensation down. An acquired taste may be, but we acquired it in about 10 minutes. The flavour was just… durian.

Mr Sheng looked thoroughly pleased with himself.  It was his great, great grandfather’s farm.  He had generations of blood invested in this crazy fruit.  He had every right to swell with pride.

Eddy laughed and nibbled on a chunk himself as we tried, uselessly, to describe this new sensation.  After a few attempts, we gave up and just dived into another chunk of creamy, smelly durian before smashing the beastly fruit entirely.

With friends, we’d slain the monster, and what was left behind amid the torn fragments of spiked green armour was a new and tremendous appreciation for none other than the King of Fruit.

Wanna see what it all looked like? Check out our Durian Place Cake now: