How to shoot an Elephant 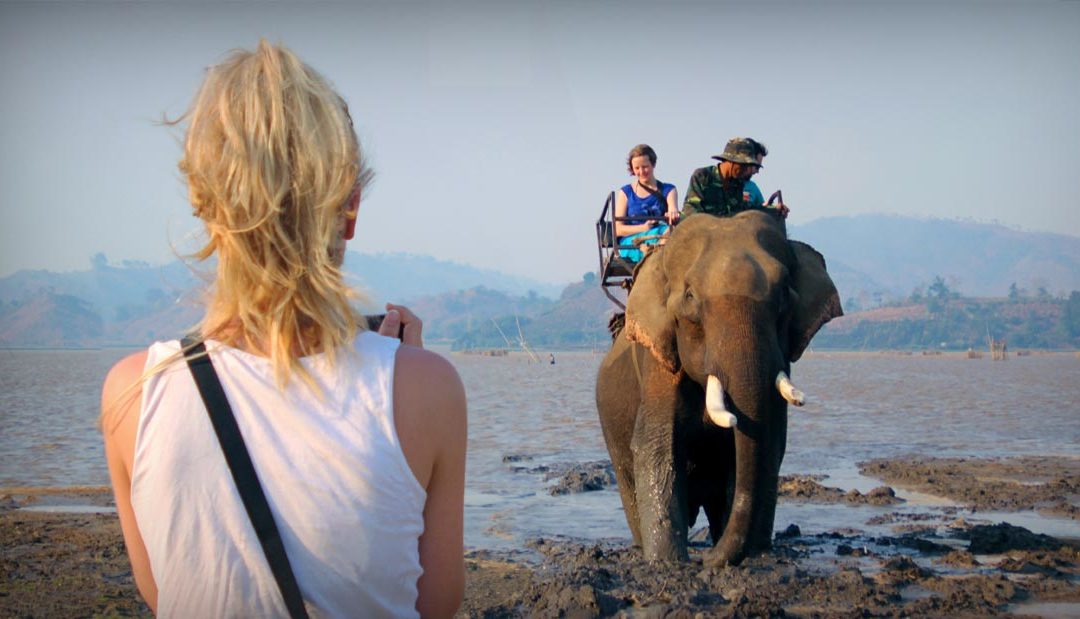 We’re up for big film challenges, so jumped at the chance when we were asked to film an elephant ride in Buon Ma Thuot, Vietnam. “Never work with kids and animals” is advice you’ll hear from any seasoned industry professional, but being the Rat & Dragon maverick team (animals are in our name!), we didn’t shy away. This was going to be a tricky one though. Due to a last minute changed schedule (in Vietnam, the word “schedule” has a pretty loose definition) and the fact that this particular ride took us not jut around the lake shore, but actually straight through the water, meant that we had nearly no time to prepare, and not much idea what to prepare for.

When we started off on this Epic Journey, we set ourselves the mission of gathering travel content to knock your socks off, and while we had a spectacular subject in hand, how were we going to deliver the shots? Quick on your feet thinking saved our not-so-thick skins.

No amount of amazing kit can capture an animal, if you don’t know where it’s likely to be going. Getting ahead of the elephant and shoot it coming towards us was the only way we could show it off, so with no time to get a translator to speak with the driver, we had to employ some Sherlock Holmes style detective work Cumberbatch would have squee’d at.

Obviously, when the elephant was on a road or path with no turnoffs, it was a fair assumption that you could race ahead, but when it spotted some tasty leaves on the other side of a soon to be ex-shrubbery, we had to admit that flexibility was key. Keep in mind that elephants do reverse, and it’s a very very bad idea to come up close beside an elephant or from behind.

If you’ve never had the privilege of seeing an elephant in person and swapping jovial anecdotes over a cup of Earl Grey or a tumbler of scotch, you will be forgiven to believe they are rather large, round and loud animals who stomp their own paths wherever they go, inevitably flattening plants, insects and the odd pigmy in their wake. We have news for you – your childrens books lied.

Elephants are surprisingly tall structured, and unlike a cow or water buffalo, their cross section looks more like a peach stone with legs than an apple. This allows the elephant to put one foot gingerly in front of the other, meaning they can walk on paths as narrow as just one of their feet, and through surprisingly narrow gaps in trees and houses. Make sure you don’t lose your star down a small alley way when your back is turned!

Shooting the lake from its muddy shoreline brought it’s own challenges as flip-flops and other lose fitting shoes will disappear into parallel universes. In our case, bare foot was the way to go and looking for footprints from previous elephant trecks was also a great way to anticipate the elephant’s next move. Fortunately when trying to work out where he’d exit the lake, all we needed to do was find giant, knee deep craters in the mud.

As soon as the elephant ride was sourced, it was ‘action’. No ‘lights’, no ‘camera check’ or ‘sound’ and no clapperboard. Just ‘action’ and our lead talent was off. Luckily we had super-light kit ready – one of us on the elephant with a GoPro, and one of us with a snowboarding backpack with a DSLR, GoPro, tripod and batteries all ready loaded.

Elephants may look slow and lumbersome, but their relaxed gait is actually a steady jog for a human, so getting ahead of it needs a solid pace, and catching up to it after a long shot and getting ahead with time to set the camera required a flat sprint.

Once our lead talent hit the lake it was off with the shoes to wade around in the mud. The snowboard backpack (you were wondering, weren’t you?) allowed these to be stored outside the bag in a heartbeat.

From the top of the elephant, the super wide angle of the goPro was great, and perfectly suited the ‘selfie’ style we were aiming for in the final edit. From the ground, we initially followed with a light DSLR with 18-55m lens and a x0.45 super wide adapter. We were hoping to get right up close to get maximum effect from the super-wide, but abandoned the plan as we were dealing with a big bull with matching tusks so had to keep at least 3m distance, so the adapter was no longer needed, which made focusing a lot more reactive.

Elephants are gorgeous and intelligent, but they’re also ridiculously strong and at the end of the day, they are wild animals adapting as best they can to human ownership. As such, it’s best to keep your distance when running past. Never get too close behind and don’t run around in front or beside where any animal can easily be startled. If filming from ahead, stay still and preferably beside a tree as well where you look less intrusive.

Chose the right one

We cannot stress enough the importance of animal welfare, which is one of the reasons some film makers avoid working with animals as taking proper care of them on set can go way beyond the budget of independent productions. However, including animals in your films adds an unbelievable amount of life, beauty, emotion and interest, so wherever you do chose to film an animal, make sure you are supporting an organization that looks after the creatures in their care. You can find a list of accredited organizations here:

And if you happen to have shots you would like to share, we would love to see your best ones in the comments below. And yes, your beloved pet Chihuahua can star as well.